What is a Lithophane? 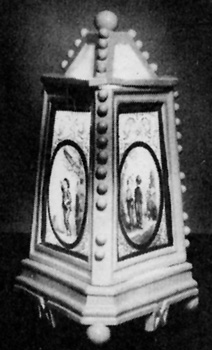 It was the efforts of the Baron de Bourguignon that led to the great popularity of lithophanes during the mid-19th century. His concept was simply this: a sheet of porcelain carved in varying degrees of thickness, when held to a light, would result in a highly detailed picture with the soft image quality of a mezzotint. This simple concept however, was not easy to execute. Sheer artistry of high order was required to make a master carving from which the lithophanes could be molded.

The very first lithophanes were individually carved entirely by hand. But shortly after their introduction, the artists reasoned that molds could be made, from which numerous pieces could be cast. To produce these molds, a sheet of wax was placed on a piece of plate glass. This provided sufficient transparency for the artist's guidance. The full thickness of the wax on the glass stopped all light, and any scratch or gouge produced varying degrees of gray. Therefore, the entire range of shading from dark to bright was available for the skilled artisan to bring to life.

The artist first drew his general design on the surface of the white wax. Then, with modeling knives, burnishers, and other tools, he sculpted the minute details of the subject chosen for reproduction. From the wax carving, when finally approved by the master model maker, a plaster cast was made. This was the original die, which was used in molding the porcelain bisque. A moist porcelain paste was then skillfully pressed into this cast, picking up all the details in the carving. Close examination of this mold would reveal intricate surface detail. During the porcelain casting process, the friction of the clay would swiftly wear these fine details out. Sometimes, as few as 20 castings would leave the image in the mold worn out. To address this problem, the artists developed master molds. Master molds were made out of a harder plaster than the production molds, and the image was reversed; like a negative. Production molds were then cast from the master mold, allowing many more lithophanes to be successfully cast.

The seemingly simple process of removing the thin moist panels from the molds required the highest degree of skill to avoid damaging the intricate details in the image. Since the panels were very thin and delicate, and the kilns extremely hot, many fired pieces were warped, twisted, and cracked. In addition, any slight impurity in the porcelain clay body showed up when the fired pieces were lit from behind. Therefore, the number of acceptable finished pieces to come out of the kilns has always been far less than the number that went in. Sometimes, only about 40 percent of the panels survived this process. Since the earliest days of their production, these issues have challenged the makers of lithophanes. Only the most determined craftsmen could overcome these difficulties, and go on to produce these brilliant art pieces.

During their heyday, lithophanes were produced by many potteries throughout the world. Some of the finest examples, as well as some of largest quantities of lithophanes were produced in Germany by the companies Prensaich Porzellan Manufactur in Plaue (P.P.M.), Berlin Porzellan Manufactur (B.P.M.), and Koniglichen Preussische Manufactur (K.P.M.). About 25 factories in Belgium, France, Denmark, Portugal, England, Italy, and Czechoslovakia produced lithophanes during the last century, with their popularity peaking in the middle of the century. Some of the well-known companies involved in lithophanes production were the Wedgwood and Worchester Potteries in England, Phoenix Pottery in Pennsylvania, Beleek in Ireland, and Limoge in France. Surprisingly, no individual lithophanes artists have been identified, however, many pieces are marked with the manufacturer's name.

Lithophanes were hung in front of windows, where the sunlight streaming through the panel revealed the designs in the porcelain. Since lithophanes need to be lit to be viewed properly, many beautiful types of lamps were made incorporating these porcelain artworks. Because of the era from which they originated, most lithophanes lamps were quite fanciful and ornate. Candle screens were quite popular. Typically, they consisted of a decorative frame holding a lithophanes, with a built-in candleholder to illuminate it from the rear. (Our Victorian Stand is based on this type of the lamp.) Multipaneled lamps were also quite popular. These came in many forms. Some were ornate shades that would hold from four to six flat panels, mounted on a matching lamp base. These panels could be shaped as rectangles or trapezoids. (Our six panel table lamps are based on this type of lamp.) Sometimes, a similarly constructed shade was made to hang from the ceiling instead. Other lamps, instead of utilizing multiple panels, used one-piece hollow castings; cylindrical, conical, or sometimes round, with several images around their circumference. This type of shade is quite rare and highly prized. Lithophanes were made to fit in "hurricane" type lamps, desk lamps, table lamps, ceiling lamps, wall sconces; virtually any type of lighting fixture. A unique but popular vehicle for displaying lithophanes was the tea warmer. These ornate fixtures had lithophanes surrounding an enclosure, in which a candle was lit. Topping the enclosure was a metal plate on which a teapot could be set, and kept warm from the candle below.

Another popular application for lithophanes was to cast them into the bottom of drinking vessels. As one would finish his drink, a delicate image would appear in the bottom of the cup or mug. In Germany, many beer steins were made with lithophanes in the base; sometimes with images that were quite risqué! From Denmark, and France came beautiful tea and demitasse sets with lovely images in the bottom of the cup. In the early 20th-century, Japanese potteries began to produce lavishly decorated tea sets (called Dragonware) with images of geishas in the bottom. This practice became quite popular in the post-WWII and Occup ied Japan era for the GI trade in Japan. Production of these teacups tapered off in the 1950's, and a few are still being made today. By the late 1800s, the bloom was off the rose, and the great popularity enjoyed by lithophanes began to fade. The potteries moved on to other items, and the highly evolved skills and techniques that the master craftsman had developed disappeared with the original artists as they passed away. Since then, antique lithophanes have been avidly sought by knowledgeable collectors, wise to the hidden beauty of this truly remarkable art form.

We here at The Porcelain Garden are dedicated to preserving and, indeed, furthering this extraordinary art form. All of our lithophanes are produced here in our studios, using many of the same methods developed by the original artists many generations ago. Of course, some things have changed; we now can use electric kilns for more consistent heating, and we use electric mixers to blend our porcelain formula (mixing clay by hand is not very rewarding artistically). But the entire process of individually casting, finishing, drying, firing, and inspecting each piece, is still done today the same way it was done by our predecessors. It took us quite a few years to develop and hone our own skills, and we feel we now produce lithophanes of a quality and detail to rival the finest ever made. And we are very proud of that!