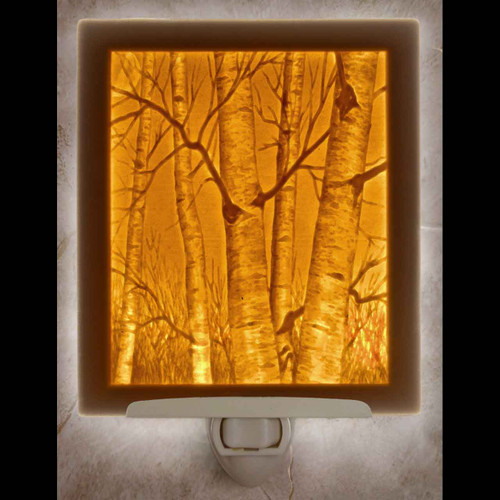 This is a "lithophane" plug-in night light, featuring a thin translucent porcelain panel, made using a lost art from the 1800's. When lit from behind, the light shining through the different thicknesses of the engraved porcelain causes a highly detailed image to appear in front, almost magically. As you see, the illuminated image is so detailed, that it has a totally photographic quality to it! In addition, the relief of the carving gives the image a 3 dimensional quality when seen in person. To make them, we start by carving the image in a translucent wax, with the wax lit from behind. We then take a plaster mold of this engraving, and we then cast a fine porcelain clay into this mold. We then kiln fire the porcelain to 2300 degrees F. to achieve it's translucency and durability. Lithophanes were invented in France in 1827, and were popular throughout Europe till the early 1900's. They mysteriously faded from popularity with the advent of electricity, and became a lost art, until I re-discovered the secrets of this art. We first started making them 32 years ago by reproducing the antique ones. We eventually learned how to engrave our own originals, and this has been our specialty ever since.

The Birch tree is a symbol of new beginnings, rebirth, and growth. The strong and water-resistant cardboard-like bark can be easily cut, bent, and sewn, which has made it a valuable building, crafting, and writing material, since pre-historic times. The striking texture and contrast of these trees give this night light a peaceful and appealing beauty.